Firstly,look at the pattern of handwoven rug. Each hand woven Silk Rug is an artwork, and the details of the pattern are of worth noting - the color should be harmonious and pleasing, the size of the flower should be the same, the vine line should be delicate, but the overall feeling is more important.Love at first sight, it will be right. 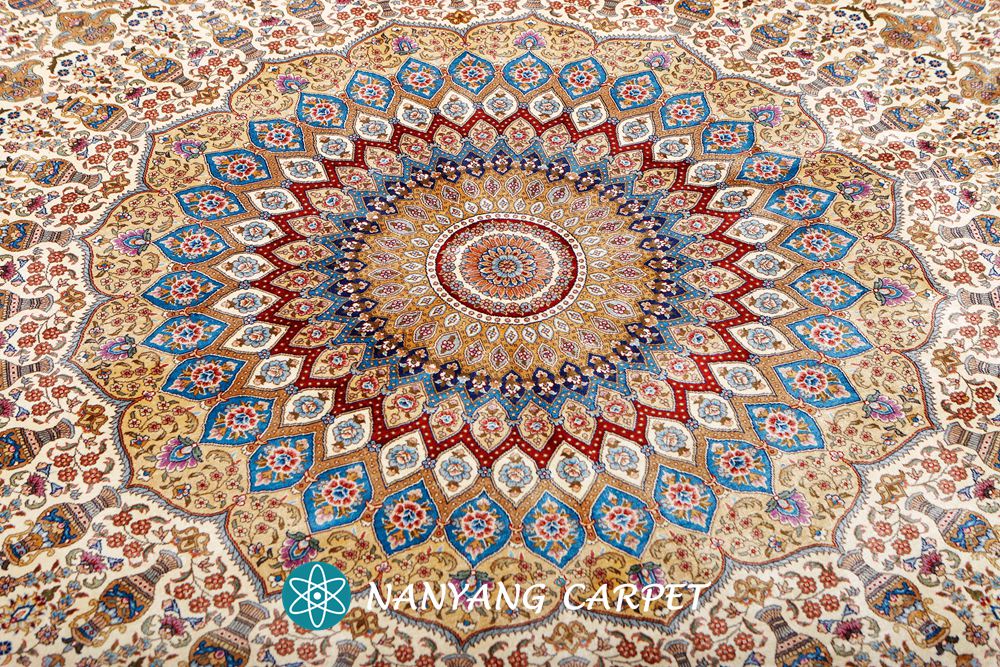 Second,Look at the number of knots.Turn over to the back of the hand knotted rugs and count the number of knots per square centimeter. The denser the knot, the more knots, the better the handwoven carpet quality. Ordinary household hand woven Silk Rugs generally have 57-96 knots per square centimeter, and the top-grade carpets can reach 1076 knots. However, the top grades are generally collected in museums, which are expensive and generally not seen by ordinary people. 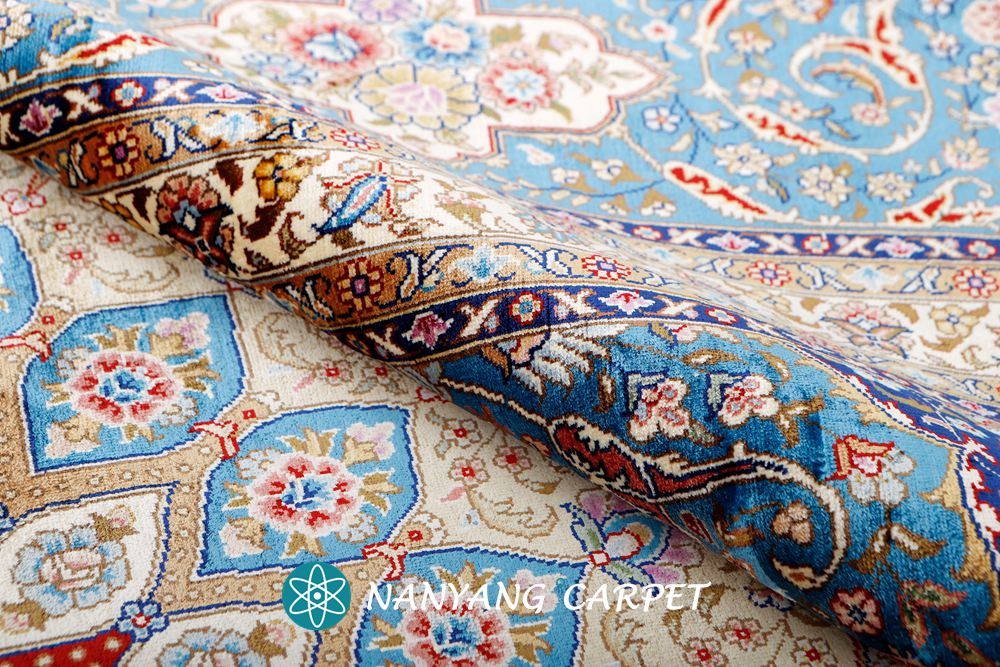 Third,look at the materials. Hand knotted carpets are time-consuming and labor-intensive, weaving one rug, and sometimes it takes several months, even several years. Therefore, in the selection of raw materials, it is very careful, generally using silk or wool. Silk can be made into a high-density handmade rug, and wool can only be made into a low-density handmade rug. In the market, the price of handmade wool rugs is generally only two-thirds of the price of Handmade Silk Carpets. However, the wool rugs is thicker and rougher.The Silk Carpet is thinner and more graceful. 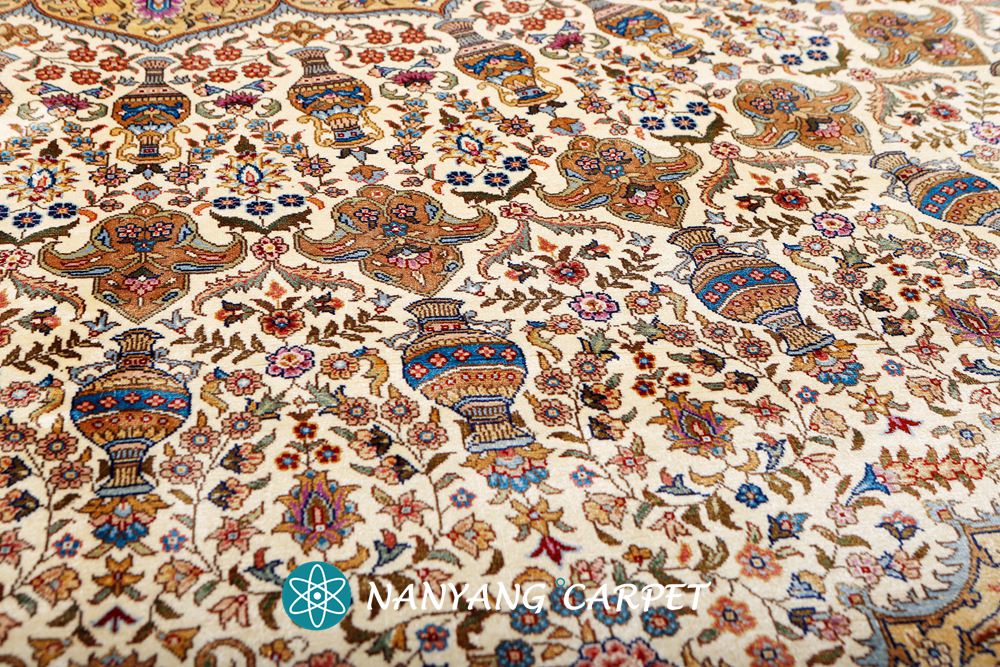 Forth,look at the draftsman: The hand made silk carpet is completely hand-drawn by the draftsman on the paper. It takes about one to three months to draw a set of artwork. These patterns are fully integrated into the personal art cultivation and style of the draftsman. Some of these people are masters of national arts and crafts, and more are [artists" who are hidden in the folk all the year round. They have no famous name, but they have far-reaching influence in the industry and are truly [innocent kings". Therefore, the hand made silk carpet you purchased from which draftsman`s hands is one of the factors in determining the value of the handwoven silk carpet. 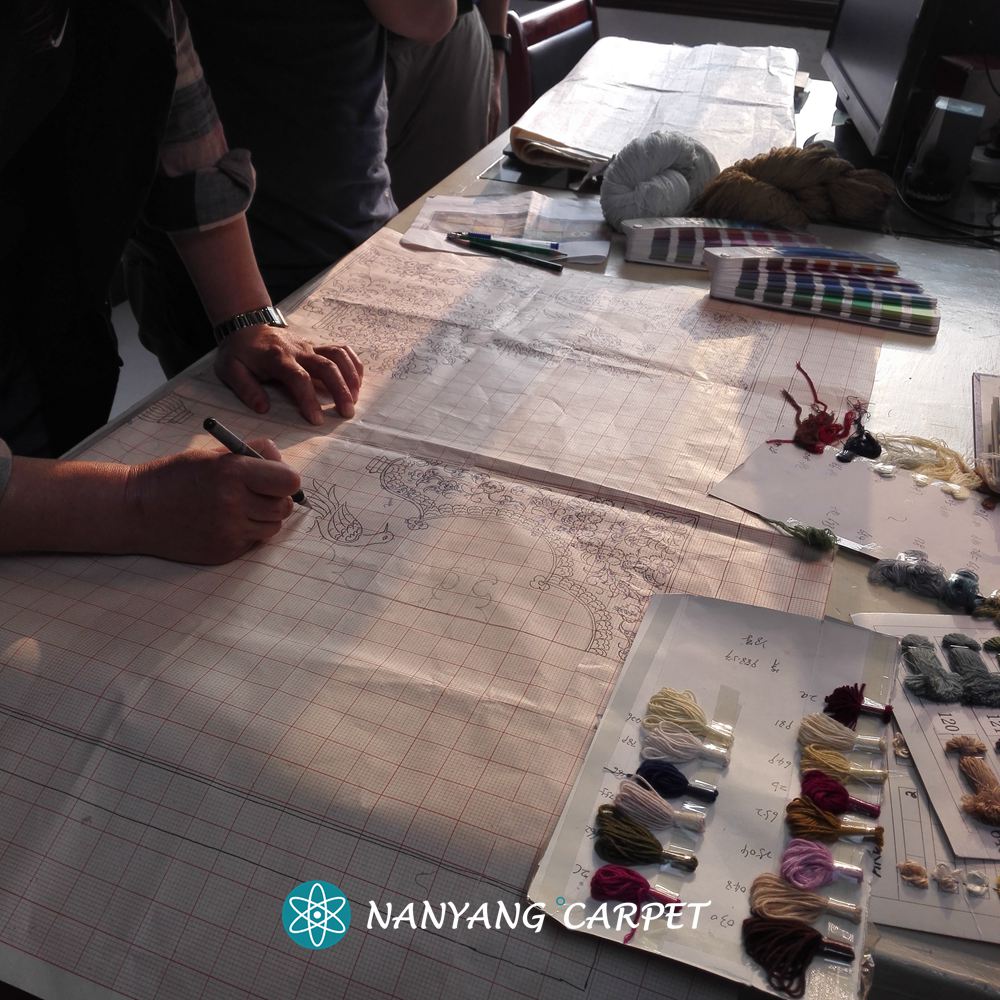 Fifth,look at weavers. The best age for women workers who weave handmade Silk Carpets is 35-45 years old. Too young, the knitting technique is not mature enough, and it is inevitable that there will be defects on the carpets. The age is too big, the eyesight and physical strength are falling, the hand strength is not enough, and the perfect carpets cannot be woven. The best weavers who can weave fine silk carpets are mostly 35-45 years old.

Fifth,look at the year.The longer the time, the greater the appreciation space of the handmade silk carpet, and the color of the old handwoven carpets is more charming than the new handwoven carpets. If you have enough budget, buying a century old antique carpet, whether it is collection appreciation or investment, will not let you regret.

Sixth,look at the price. In the past sixty years, hand woven silk weaving has formed a climax in China.Nanyang City,China produced a handwoven silk carpets with high lines, accounting for more than 95% of the world, was exported to Turkey ,Iran and other countries. Then,these handwoven silk carpets from Nanyang used as Persian silk carpets were sold to merchants around the world by Iranian ,Turkish merchants. China's export prices are generally between RMB 6,000 and RMB 10,000 per square meter. Iranian and Turkish businessmen speak the story of the Arab flying carpet. The resale price is generally about RMB 120,000-300,000 per square meter. Therefore, a large number of handwoven silk Persian Carpets,which are bought by rich Chinese from overseas, are actually from China. Its real value is 6k-10k per square meter.

The Indian woven carpets were originally derived from the traditional style and design of Persia. Later, it gradually incorporated into Mongolia and India's own art.

Indian carpets are recognized as the most traditional and complex. As India's carpet industry grows, it gradually has its own brand. The Indian Carpet is known for its exquisite patterns, stunning colors, exquisite craftsmanship and elegant design. 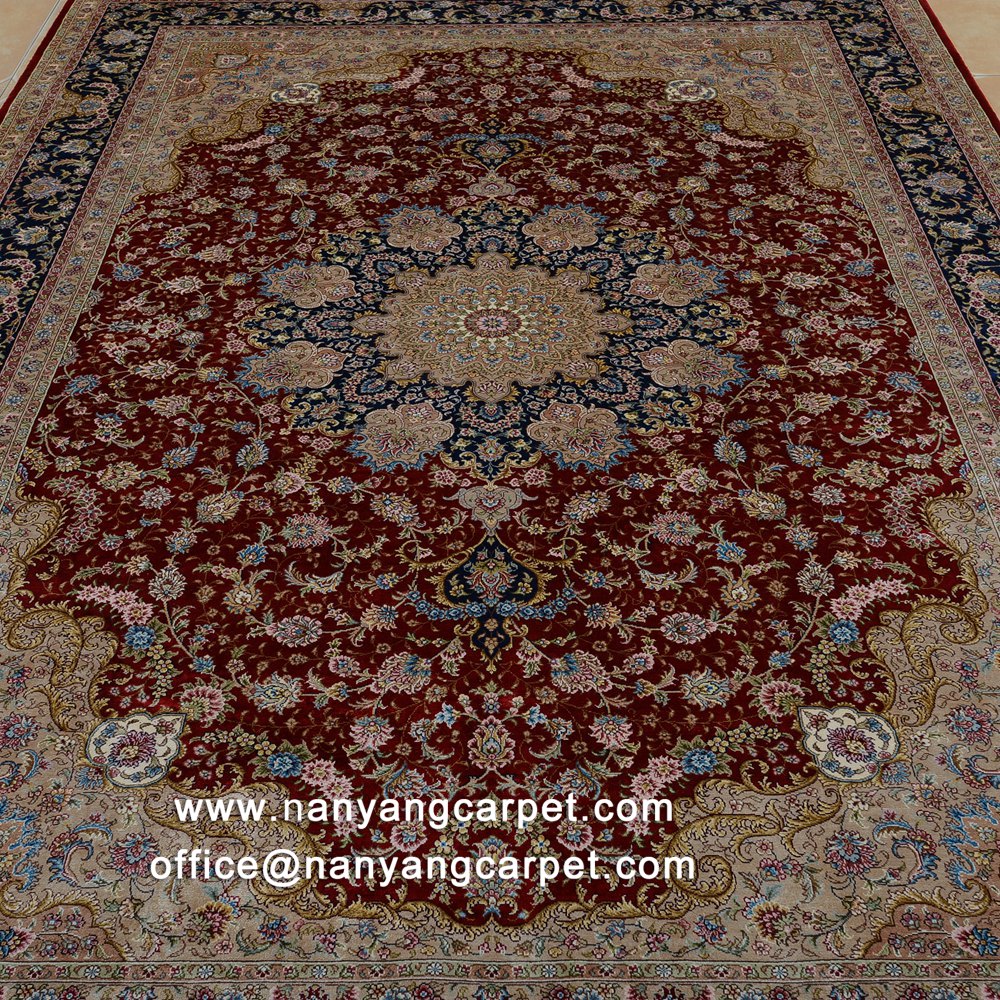 As we all know, India's carpet weaving process began in 500 BC, and weaving mats and carpets were created during the ancient Indian civilization.
However, the true Indian carpet industry began in 1500 AD. At that time, Indian society was in the period of Akbar (the Mughal Emperor of India (1556-1605), conquered most of northern India and promoted religious tolerance policy). At that time, Akbar captured many Persian craftsmen and brought them back to India to settle down. So the original weaving of the carpet originated from Persia, and it was gradually incorporated into Indian art. Therefore, the carpet produced at that time was the typical original Indian carpet.

Subsequently, the Indian carpet industry began to diversify and was widely circulated throughout India.
At the earliest time, the basic raw materials for carpets were silk. Of course, carpets of different grades or uses were made of different types of silk. The patterns on the Silk Carpet are generally known as flowers, reptiles or birds. 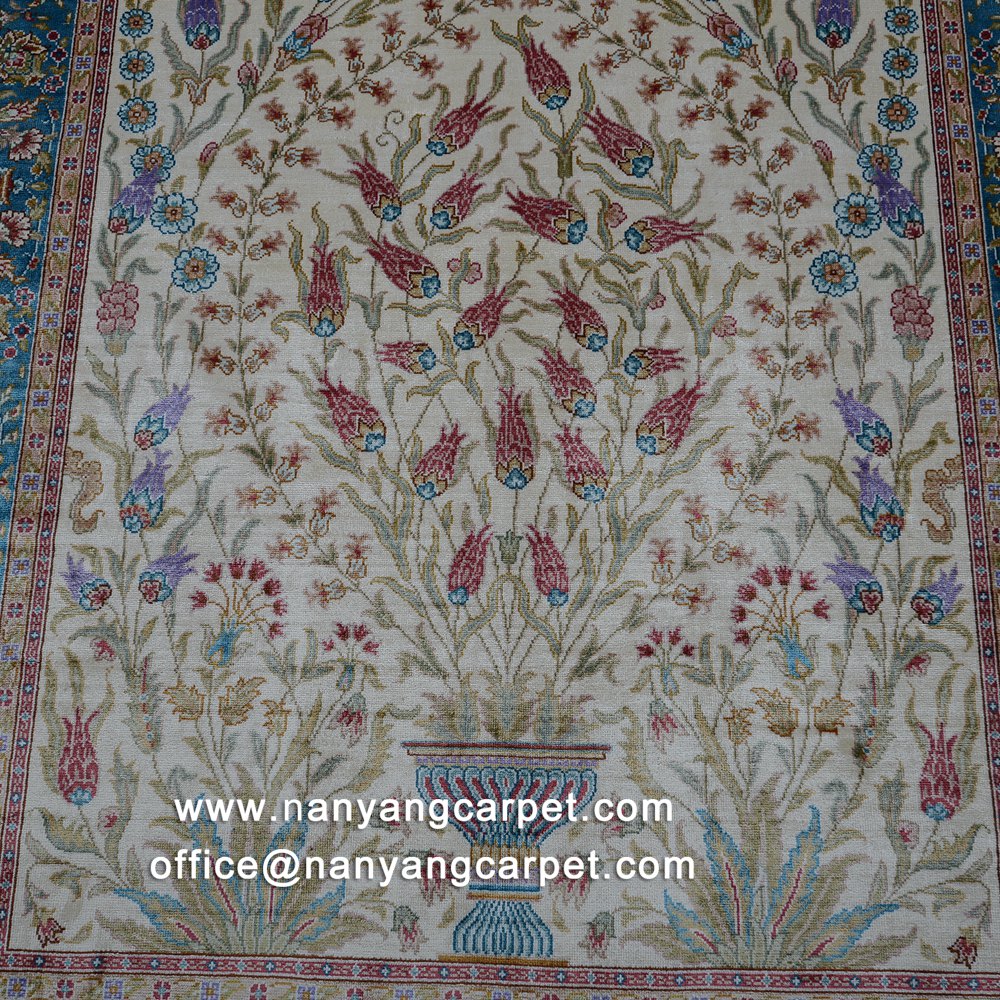 The rug of the Akbar period has begun to use a weave of cotton and silk mixed, and has a blue, green or other color on the red background. These ancient Indian rugs originally used the Persian style, and the latter were mainly Indian style. 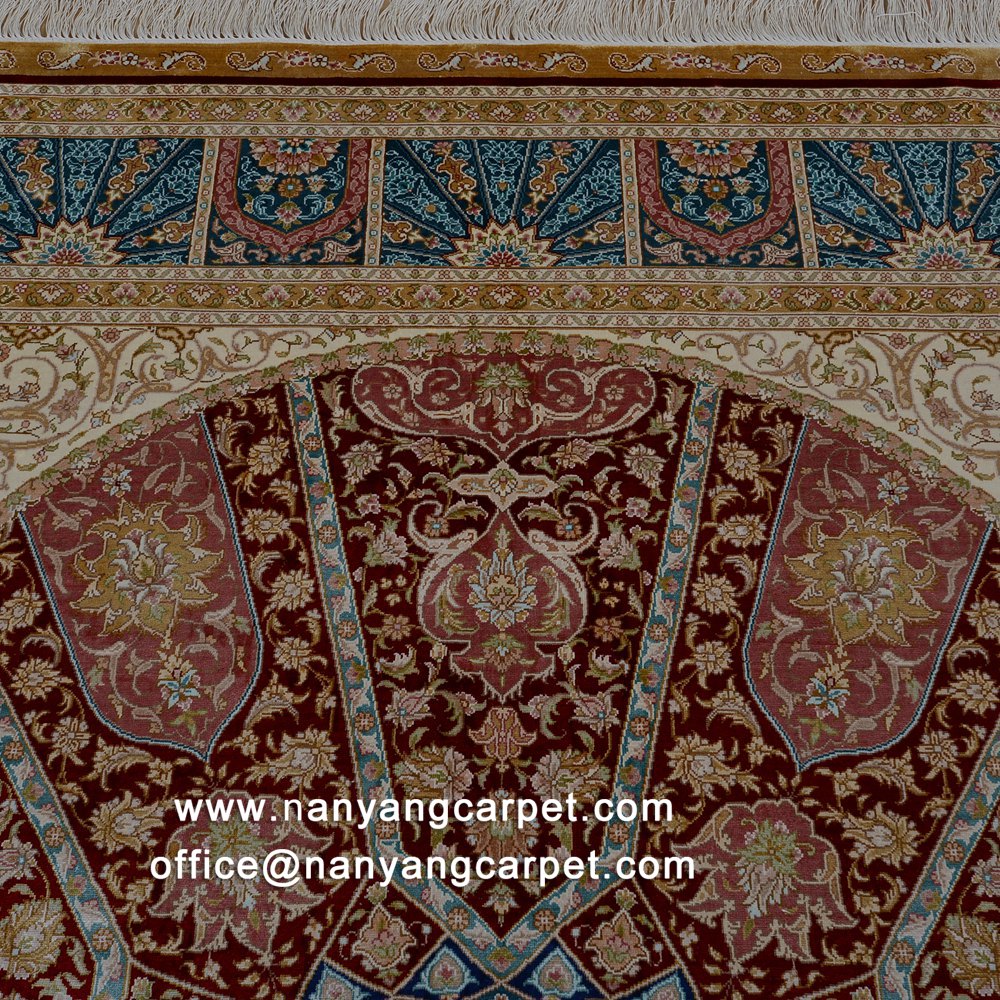 In the era of Jahangir (the emperor was reigned from 1605 to 1627), Indian carpets have improved in production and design. The materials used have also changed. The most popular material at the time was Pashmina, a cashmere that could be knotted on the back of the carpet to hold the fluff on the back of the carpet.
Therefore, the details of the operations that can be performed on the carpet are increasing. Smaller patterns, floral patterns, and even watercolor paintings appear on Indian carpets. 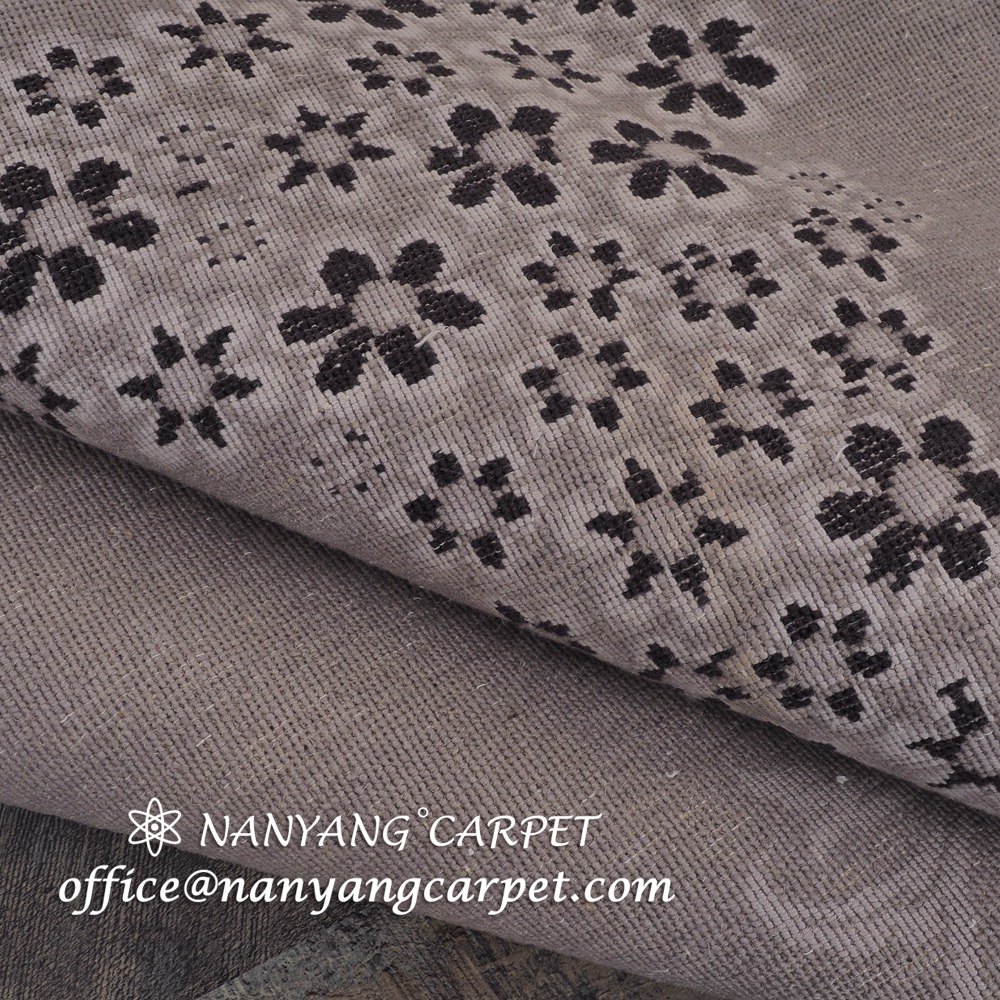 During the period of the Mughal Dynasty`s fifth-generation emperor Shah Jahan (the world heritage Taj Mahal was Shah Khan`s mausoleum for his wife), the art of Indian carpet production reached its peak in 1682-58 AD. At that time, the use of high-quality silk warp yarns resulted in more than 2,000 knots per square foot. As the yarn process matures, the texture of the carpet woven with silk or Pashmina yarn is finer than goose down. The main element of the carpet pattern of this era is the flower. 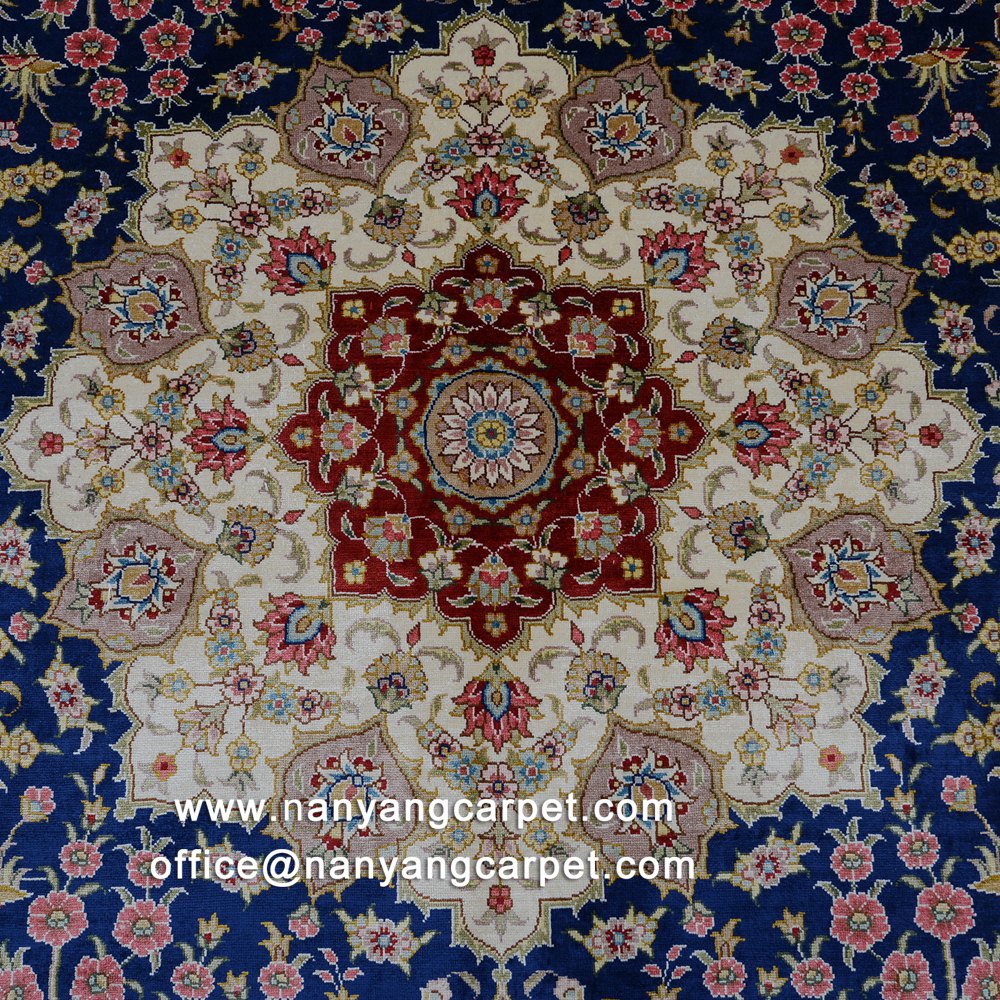 During the period of Aurangzeb (King Hindustan (1658-1707), he introduced the Hui theory and expanded the territory), the development of the Indian carpet industry began to decline. However, the woven small carpet industry is still prosperous, mainly because the design of the large carpet is basically in harmony with religious beliefs, and often has a strong religious color. In this era, the carpet industry has made almost no progress. Materials, design and color are used in the forward direction.
Website: www.nanyangcarpet.com
Email: office@nanyangcarpet.com
WhatsApp/Phone: +86 150 3823 8579
Posted by Nanyang Silk Carpet Factory at 下午4:50 没有评论:

Tibetan Rug and Carpet For Sale

The Tibetan Carpet is a daily necessities for Tibetans. Therefore, after thousands of years of development, its color has preserved the essence of Tibetan Carpets and is best matched with the living environment of Tibetans. Moreover, Tibetan carpets have already stepped out of the Qinghai-Tibet Plateau and have been recognized and accepted by the international market. Some of them are not only used by Tibetans, but also used to decorate their homes. They are also very charming and beautiful. Therefore, we have specially selected some Tibetan wool carpets for Nepal to bring to you. 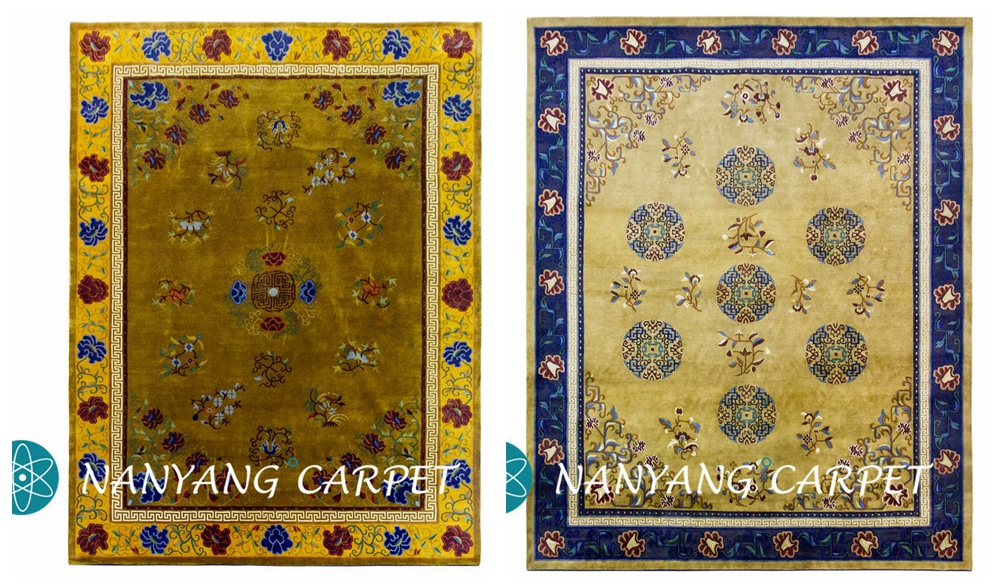 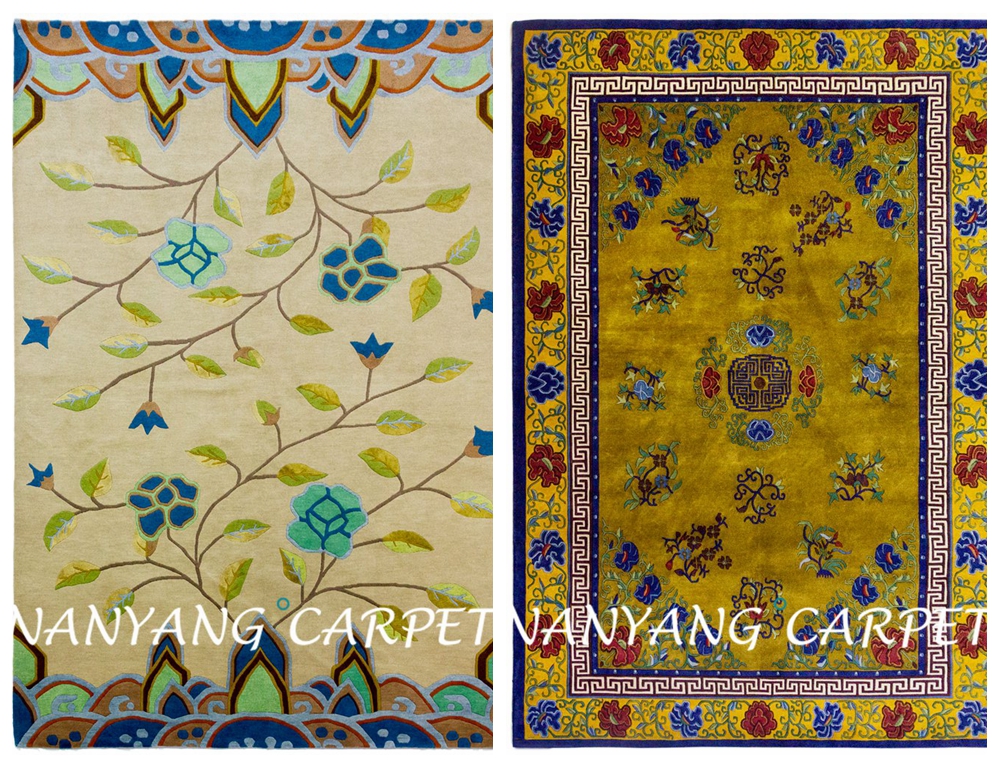 Tips to Pick a Carpet for Your Kitchen 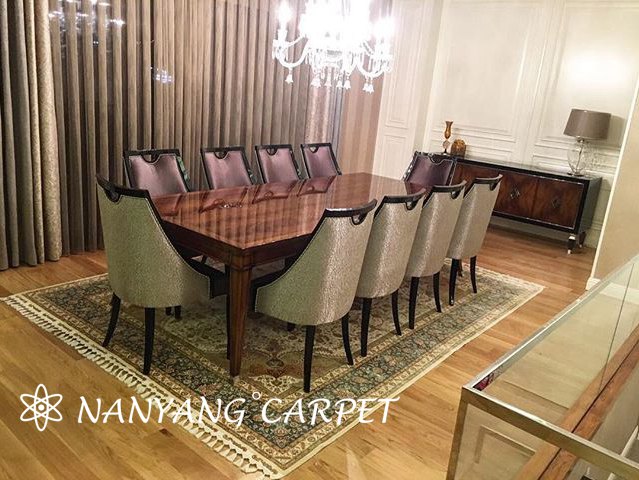 In general,consumers buy products according to their own needs and preferences,so do rug shopping.However, some people also ask "Is there an ideal rug size that works in virtually every space?"In our experience, the 8x10 Area Rug is an extremely popular choice. 8x10 area rugs really are the perfect size for every room in your home. They are incredibly versatile. Now please appreciate the popular brilliant 8'x10' pure silk handwoven Kashmir rugs.
Imagine what happens to the combination of soft beige and bright red? Yeah, it will bring the viewers a graceful and charming feeling. 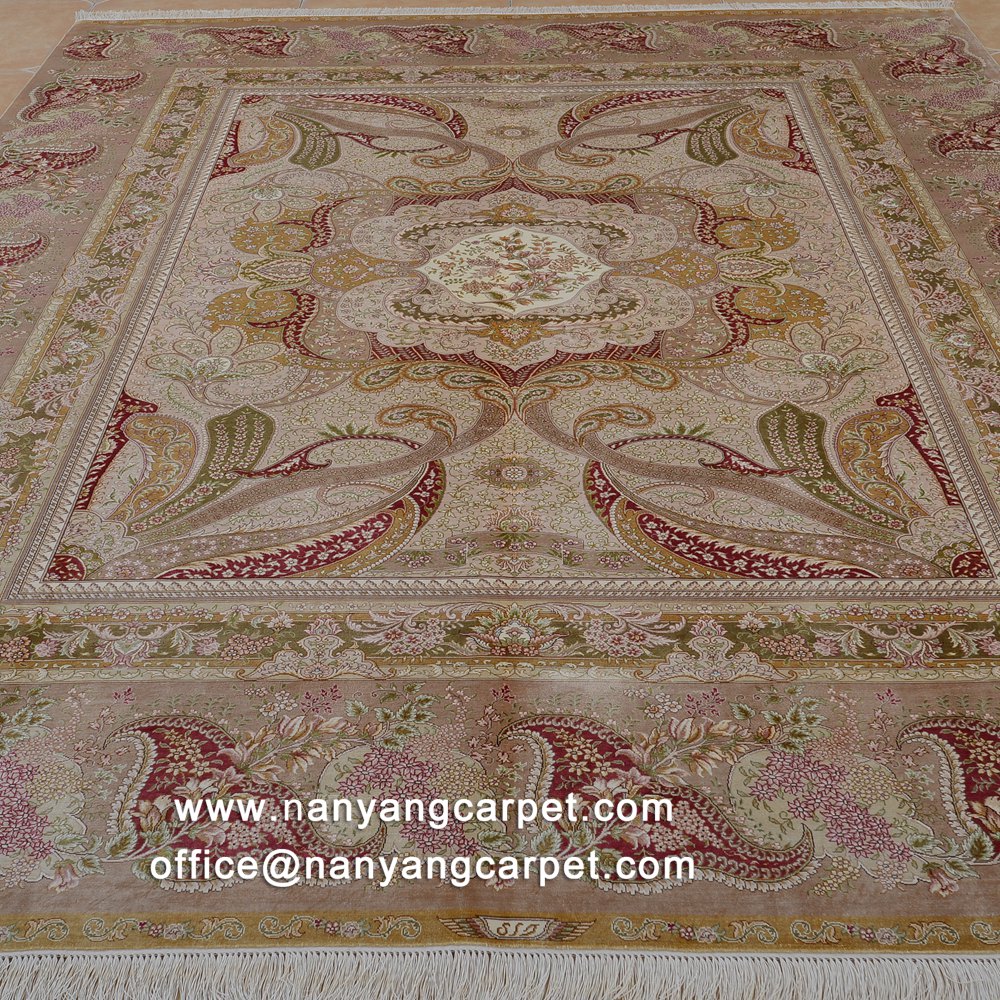 Joy put heart into a man.Red can be found everywhere during Chinese Spring Festival and other joyous occasion.What do you feel when a vibrant red rug appears in front of your eyes? For me,it is really a gorgeous and magnificent sense. 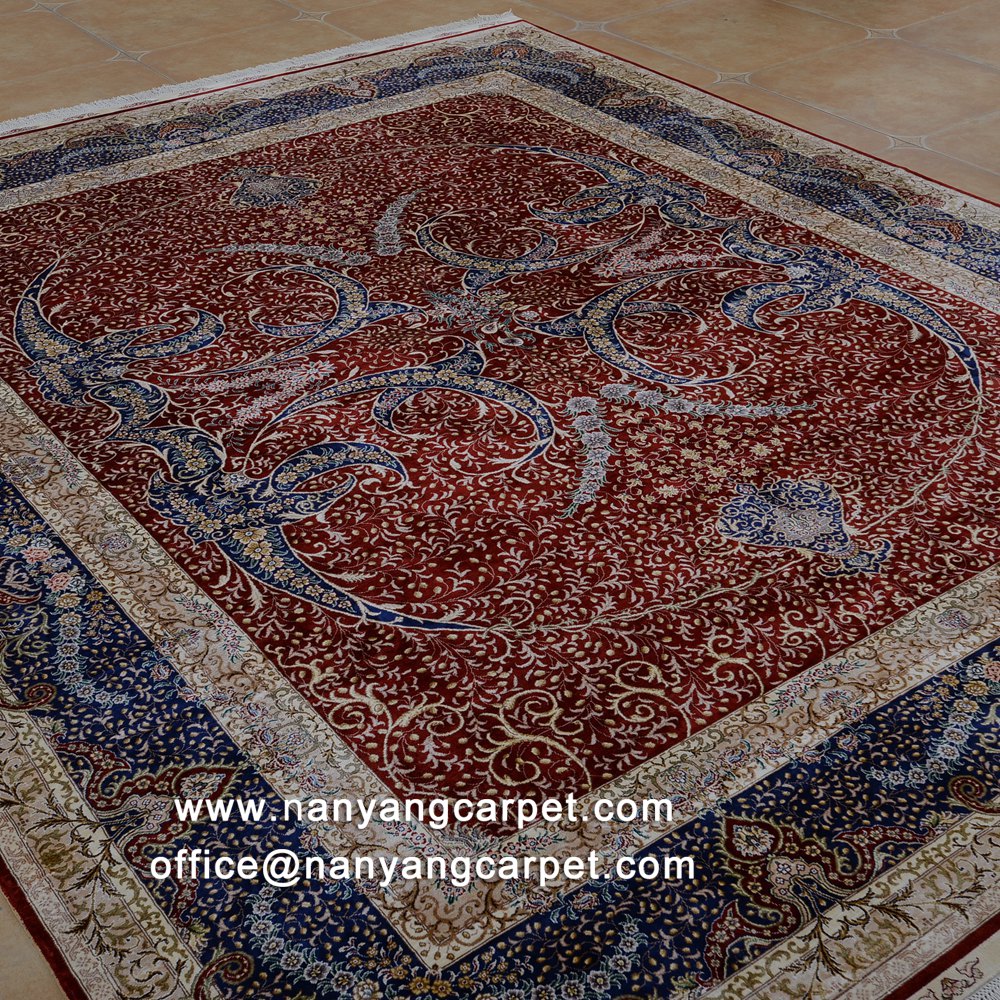 Vivid vines,lively leaves and pretty flowers adorn the vibrant crimson field of this splendid 8'x10' Hand Knotted Kashmir Rug, which enhance the overall beauty of the 8'x10' hand knotted rug.The sharp juxtaposition of noticeable blue and vibrant crimson brings a strong visual effect.
Decorating the living space with red Kashmir rug will give a feeling of luxury, if matching with the white furniture, it really has noble taste.