Some common patterns that came from the Chinese traditional auspicious motifs are usually used in Chinese antique carpets,such as phoenix pattern,Xiangyun pattern,fish pattern,water pattern and so on.

In Chinese traditional culture and art,the phoenix implies auspiciousness and peace,which also represents the power of women.And the phoenix is often combined with flowers.which is a symbol of happiness and harmony.
Xiangyun means auspicious cloud and also contains the meaning of harmony and auspice.

The fish design is a symbol of surplus in Chinese culture, another measure of a good year and a good life.The fish and water designs are symbols of prosperity and harvest.

The deer design is the symbol of longevity and prosperity. 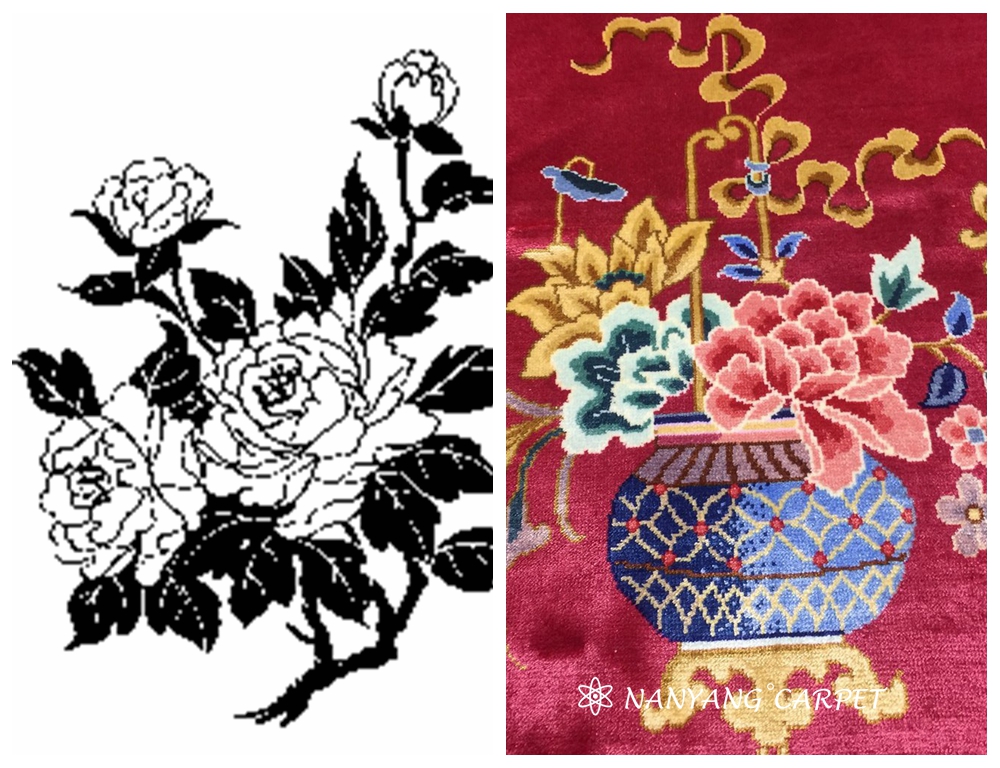 We can place Area Carpet for bedroom according to our own need and preference. How to choose a wool beside rug,particularly traditional wool bedside rug? We can choose rectangular rug or runner rug. 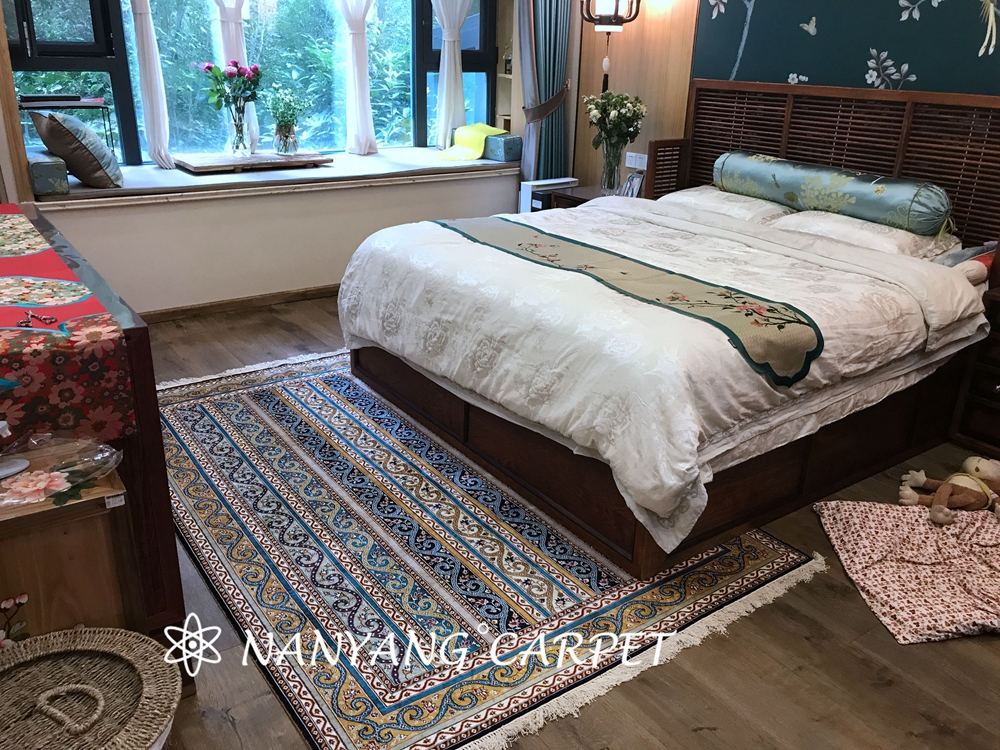 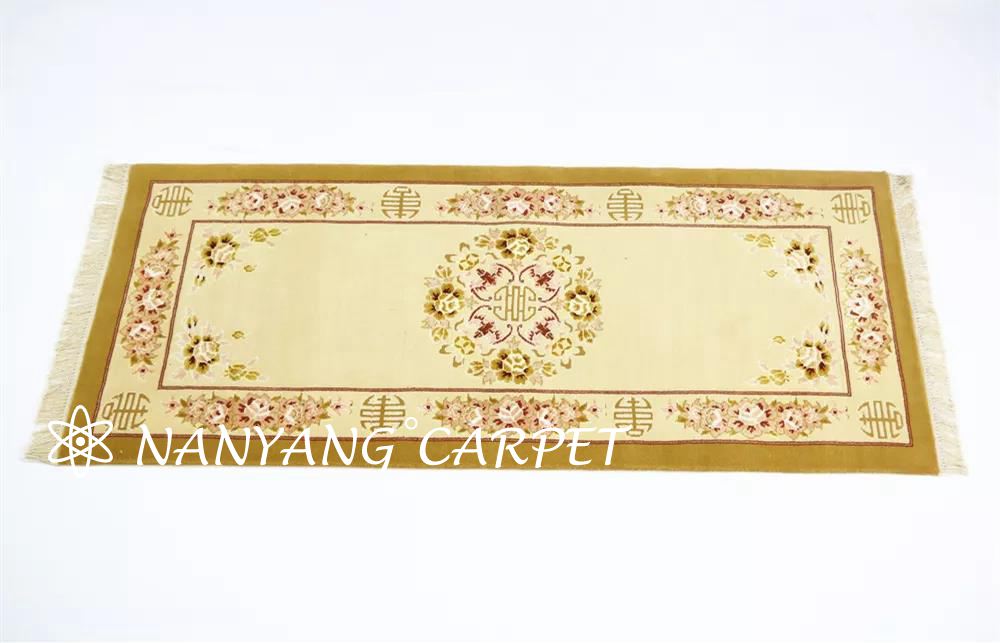 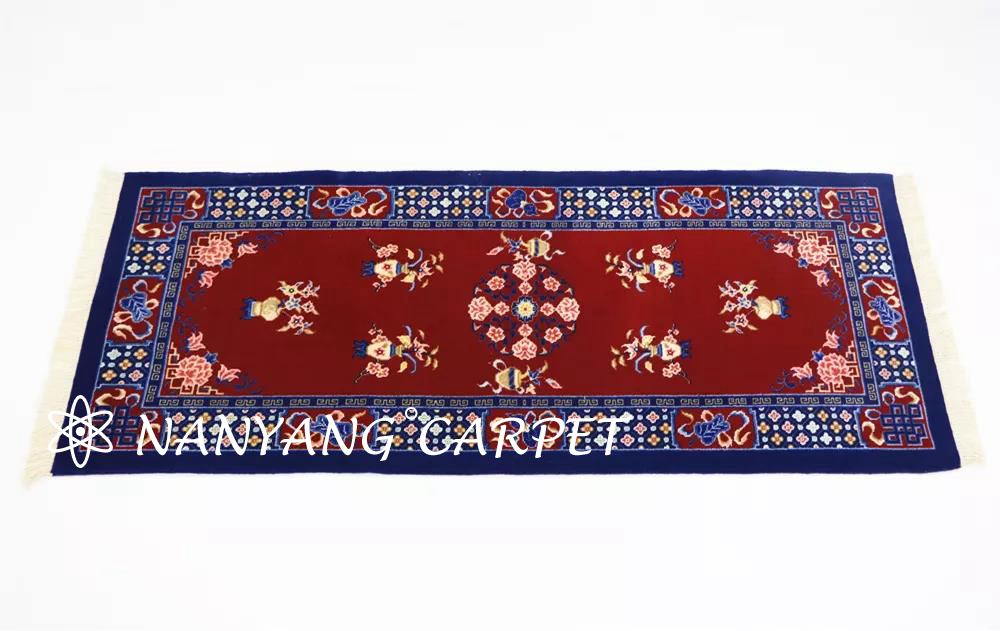 The designs of the 2.5x6ft( x183cm) bedside runner rugs belong to the Chinese freehand style,which are traditional Chinese auspicious patterns . Our designer combines freehand and realistic in design , so that the whole design is full of realistic magnificence and dreamy imagination, making the oriental elements and Chinese aesthetics fit the eyes and needs of modern people. 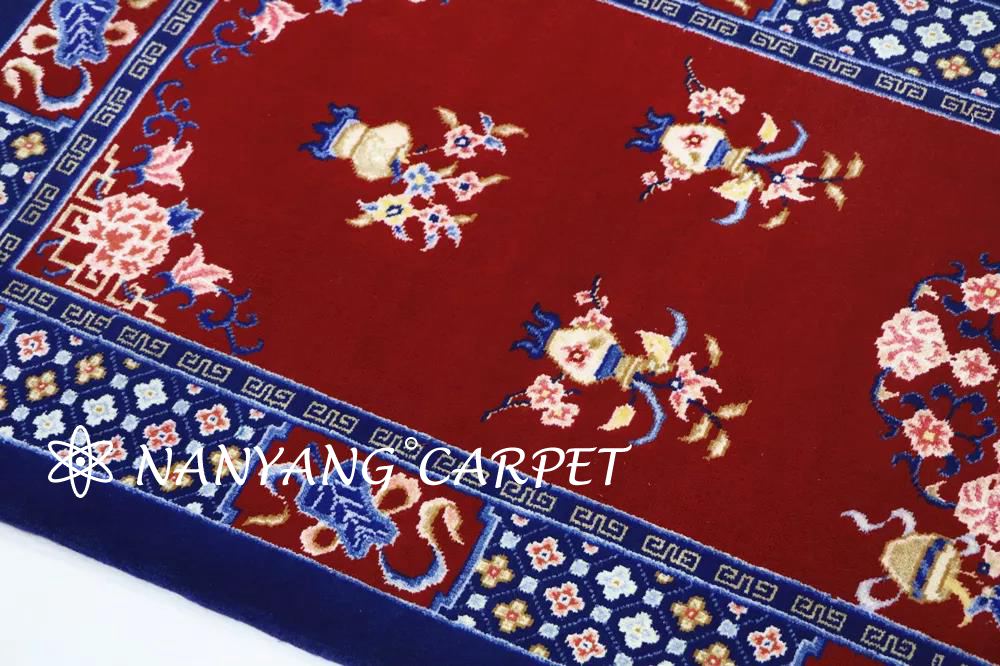 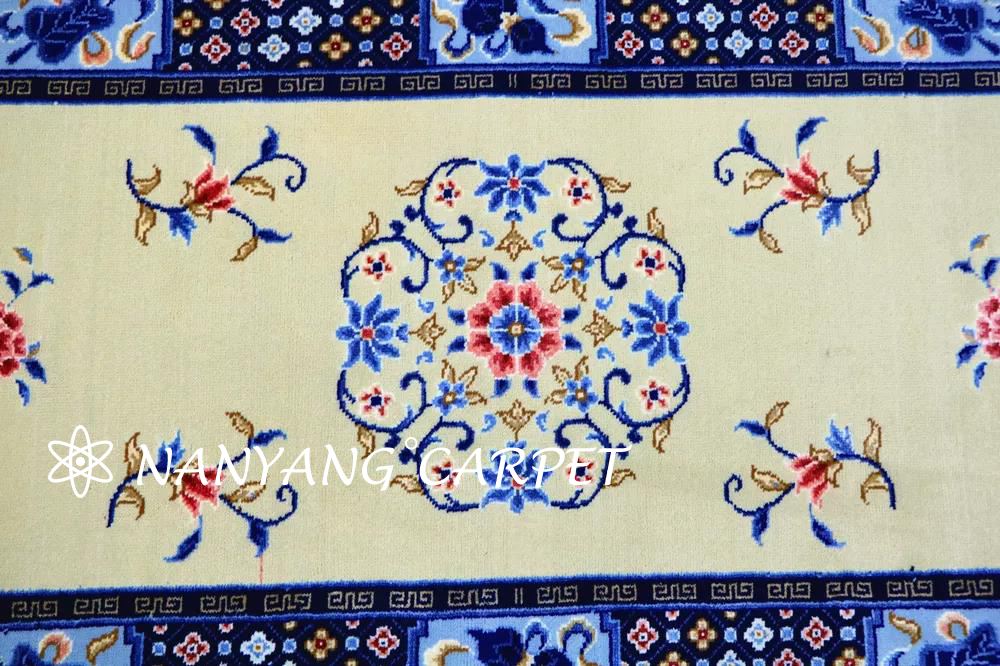 Place this kind of warm handwoven traditional Wool Carpet in the bedroom to live a more comfortable life.

A customer from Sweden purchased a 3x4.5ft(91cm x137cm) handwoven silk Iranian Rug with Tree of Life Design a few days ago. 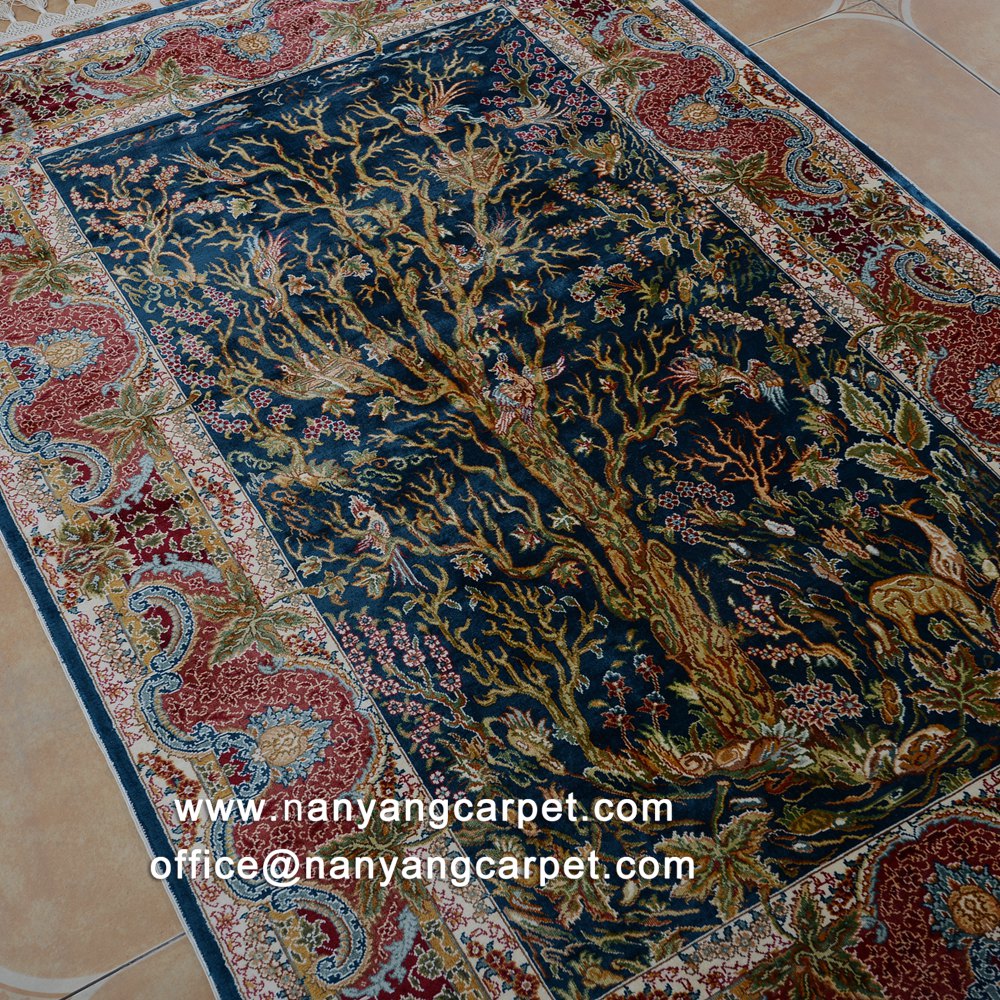 This hand woven Iranian rug is made of pure silk,and it took our one girl weaver 5 months to complete it. The real hand knotted Iranian Silk Rug is not only commodity, but also crafts.

The rug industry survived the decline of the Mughal dynasty. Now Kashmir (a region of South Asia, about 2/5 weakly controlled by Pakistan and the rest controlled by India) is the leader of the Indian Carpet industry. The origin of the Kashmiri carpet dates back to the 15th century. 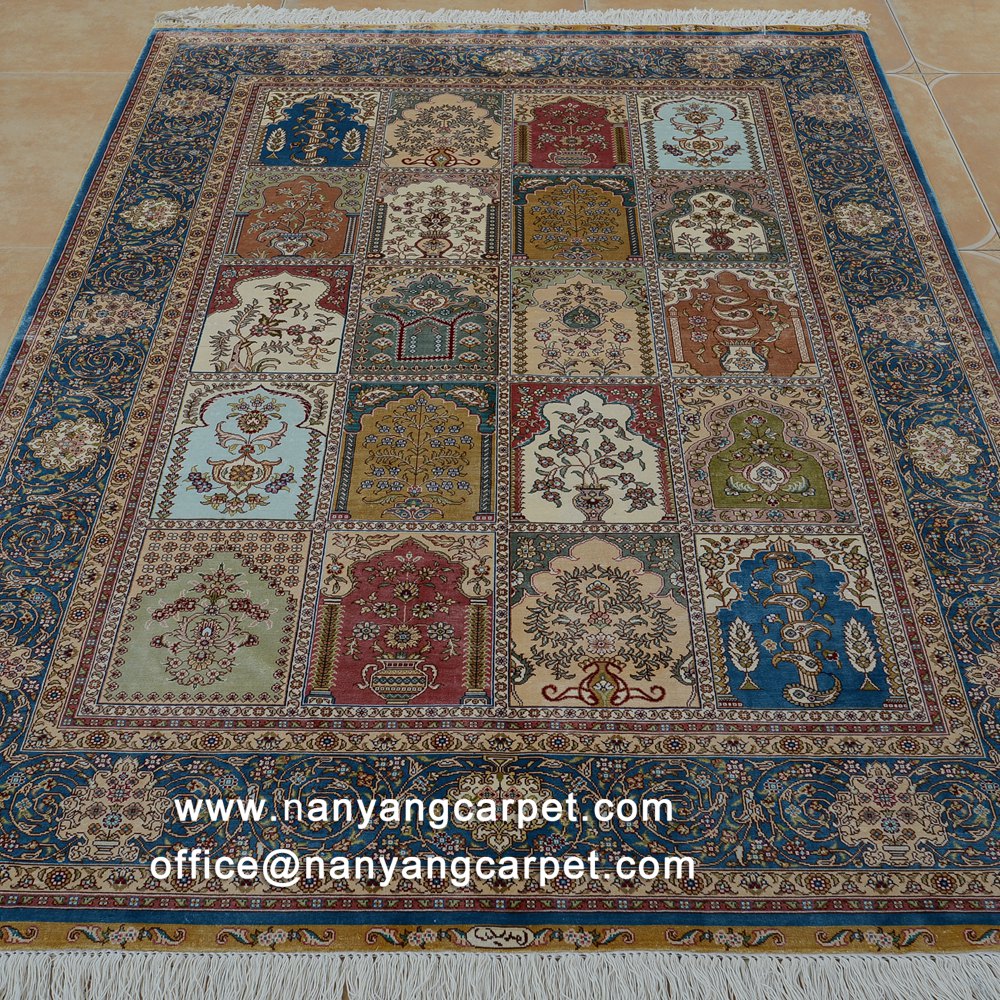 According to Kashmiri history, King Kashmir Zain-ul-Abedin brought back the craftsmen from Persia to teach the carpet weaving skills to the local craftsmen of the Kashmir Valley, while the local craftsmen were already mastered the crafts of the famous Kashmiri textiles. In the 15th century, he introduced Kashmir to the complete assembly line of carpets from weaving to cutting and cleaning. Due to his interest in the carpet industry, the Kashmir carpet industry was booming during this period. 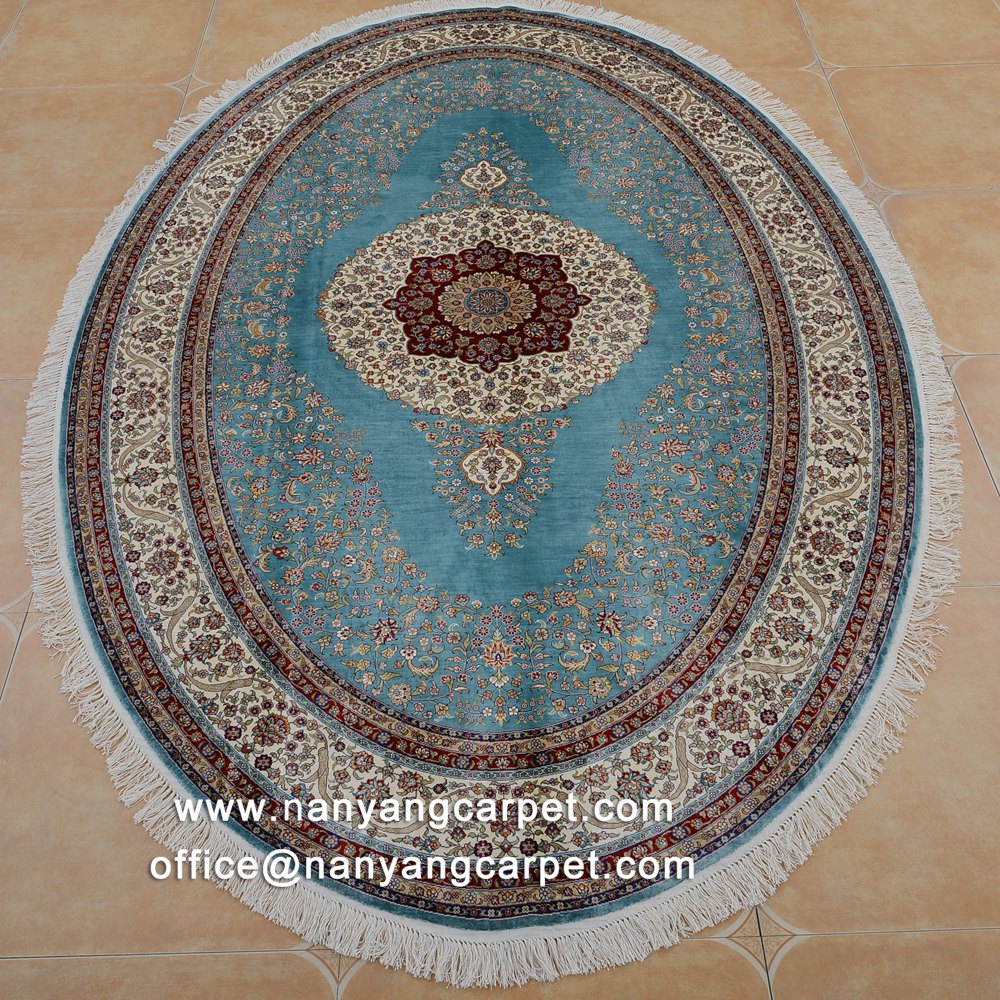 However, after this boom, the Kashmiri carpet industry was severely frustrated until the Mughal dynasty.
In the mid-18th century, the Dogras family ruled Kashmir, and the then ruler Maharaja Ranbir Singh showed a relatively strong interest in Kashmiri carpets. During this period, the production and quality of carpets have made great progress. At the time, Kashmiri carpets were well known and it even became one of the few treasures given by the king. It is only found in the royal family and the royal palace in India and Central Asia. 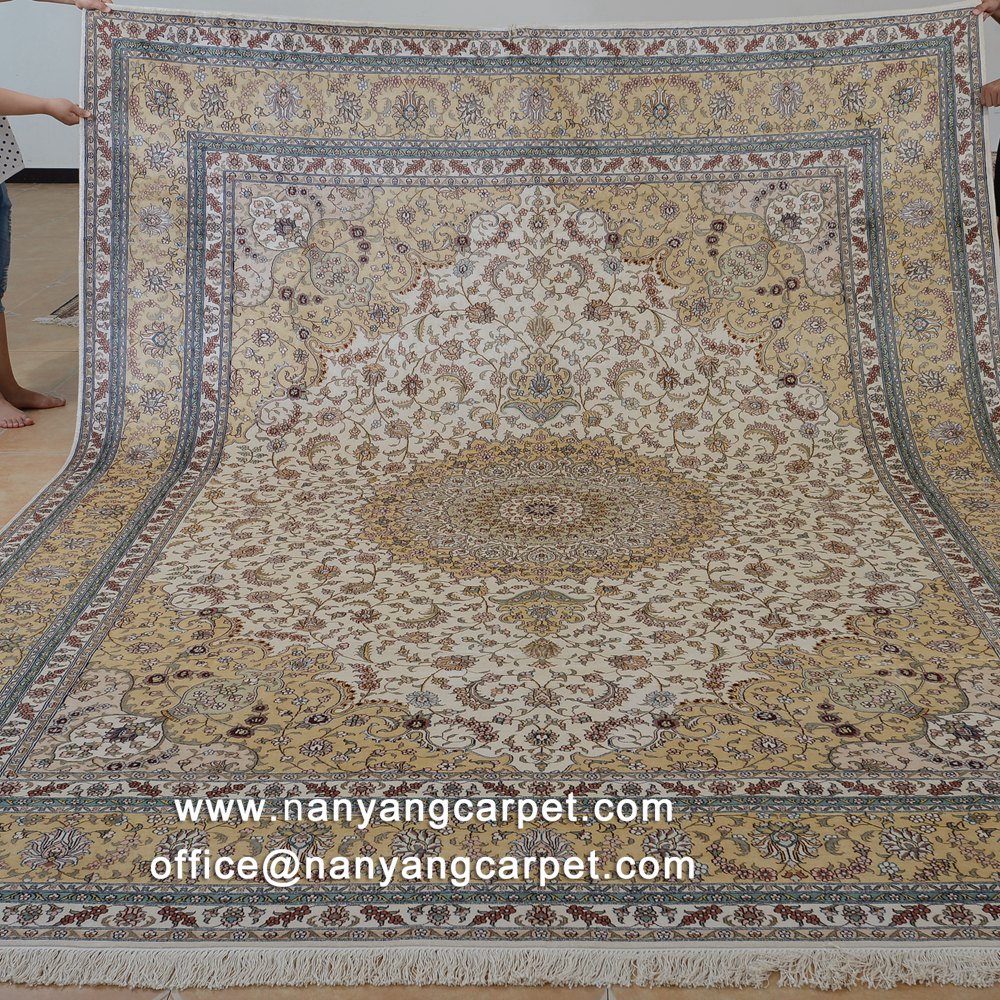 In the early 19th century, Kashmir rugs emerged in the international market and immediately gained international attention. Kashmir also became one of the best sources of hand-woven rugs in the world. Many European companies, like The East India Co., have a great interest in the carpet industry here and have quickly built factories in Kashmir. In this way, the mass production and export of carpets began, and it continues to this day. 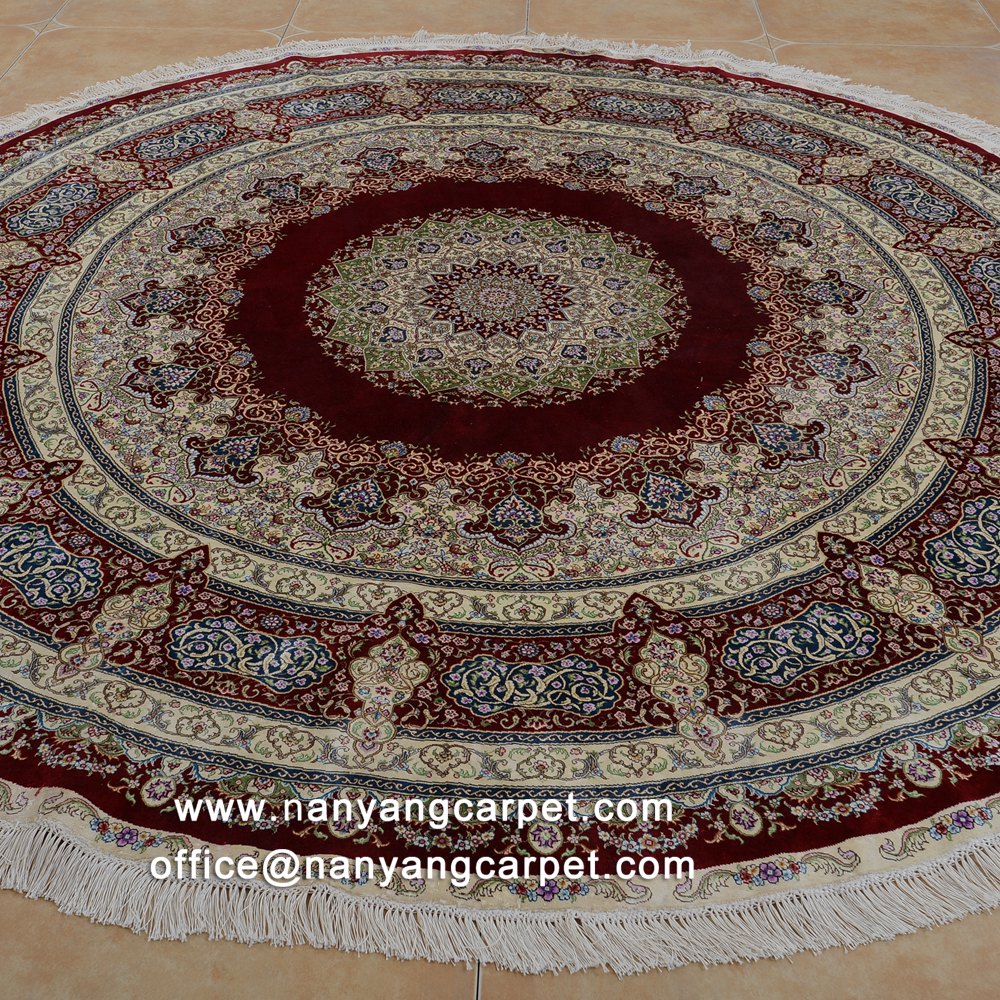 The color of the Kashmir carpet makes it extremely distinguishable from other carpet varieties. Kashmiri carpets are light in color, less noticeable, and never stand out in bright colors. The yarns of Kashmiri carpets are dyed with plants and other natural colors. The material of the yarn is mainly cotton and silk, or a combination of the two. The most common is the cotton Silk Carpet. Silk Carpets usually have some cotton filaments inside. Although silk carpets often form the essence of the industry, cotton blankets are still much more common, mainly because their prices are relatively more advantageous. 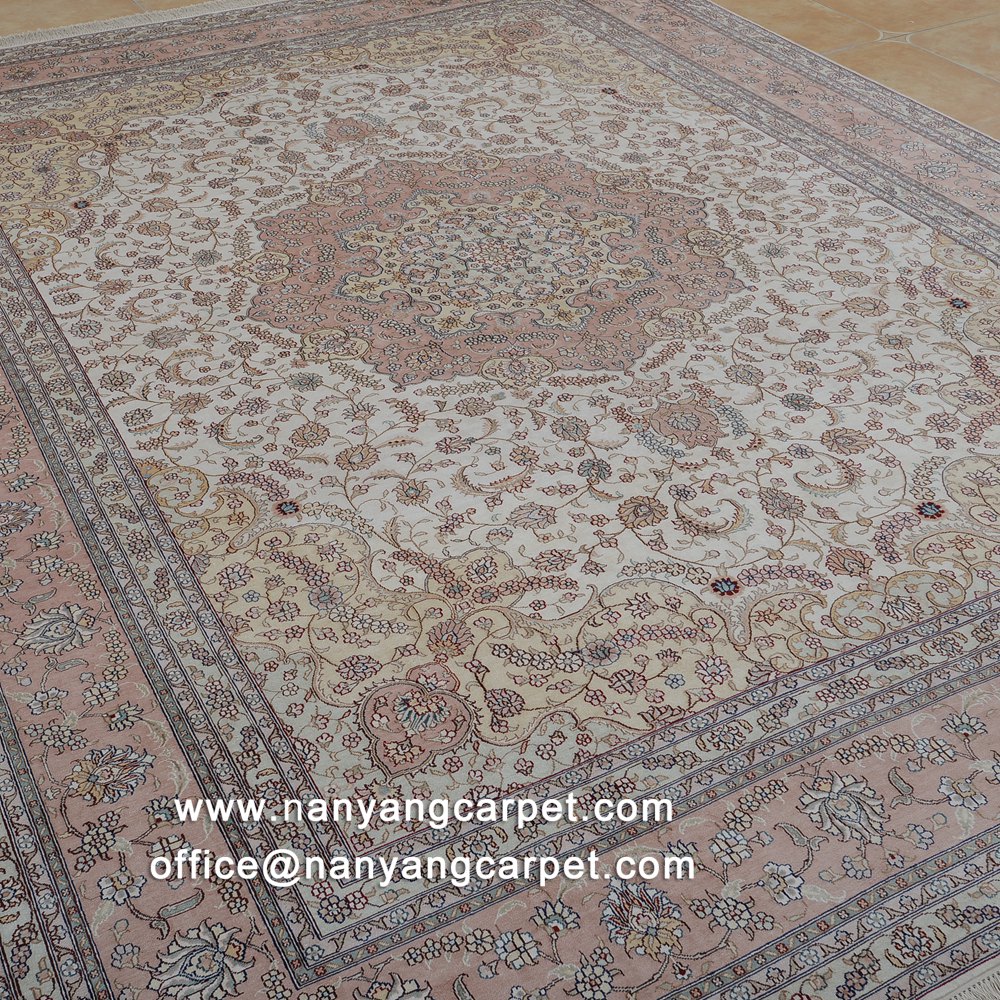 The back side of Handmade Silk Carpet

The special feature of the common Indian carpet is its elegant design, unique graphics, color matching and the quality of its materials. These characteristics make Indian carpets stand out in the world carpet industry.
Indian rugs are as durable as Persian rugs. After all, it was originally how the Persian church Indian craftsmen woven carpets, which is why today's Indian rugs and Persian rugs are as precious. Many people will buy an Indian carpet as an investment and use it as a lifetime of wealth.
www.nanyangcarpet.com
Email: office@nanyangcarpet.com
WhatsApp/Phone: +86 150 3823 8579
Posted by Nanyang Silk Carpet Factory at 下午4:59 没有评论:

How Much Do You Know About Nanyang Rug

The city of Nanyang, in central China's Henan Province, is one of the world's largest producers today,which is as a small Chinese city selling handwoven rugs to the world. 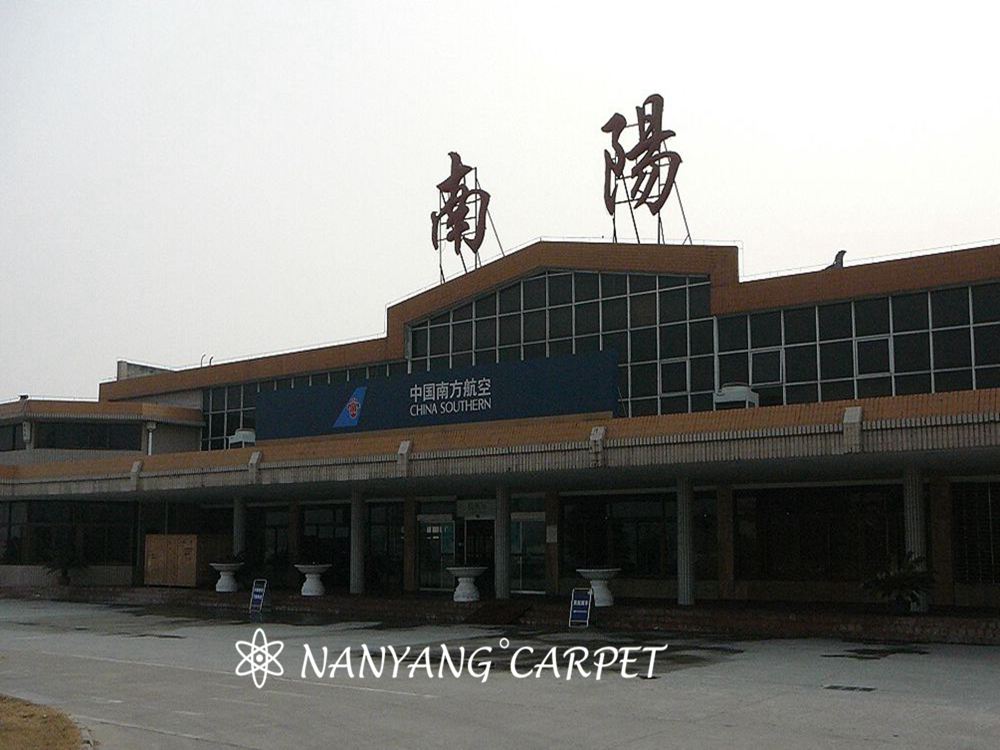 The Nanyang area of China is rich in silk, which is called the hometown of silk. The history of carpet production is also very long, especially Silk Carpets, and high-density silk carpets, which are specialties of Nanyang.Nanyang has become the world's largest production base for Handmade Silk Carpets, and produces 80% of the world's high-count silk carpets every year. 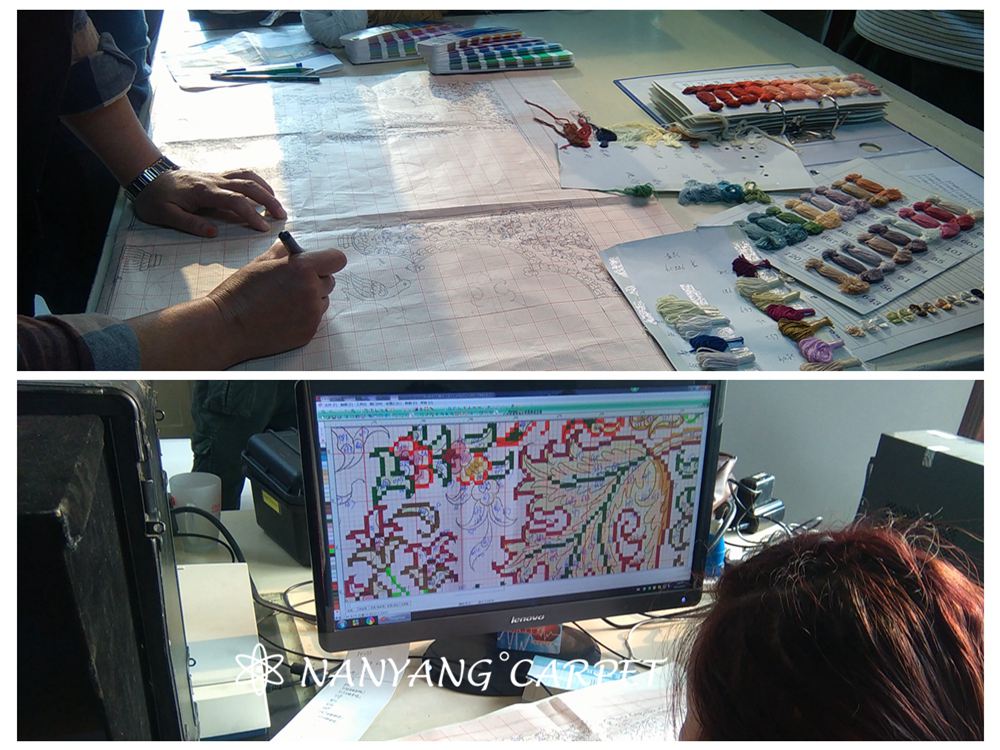 Silk carpets and rugs from Nanyang are with thousands of designs, novel styles, fine workmanship and high quality. 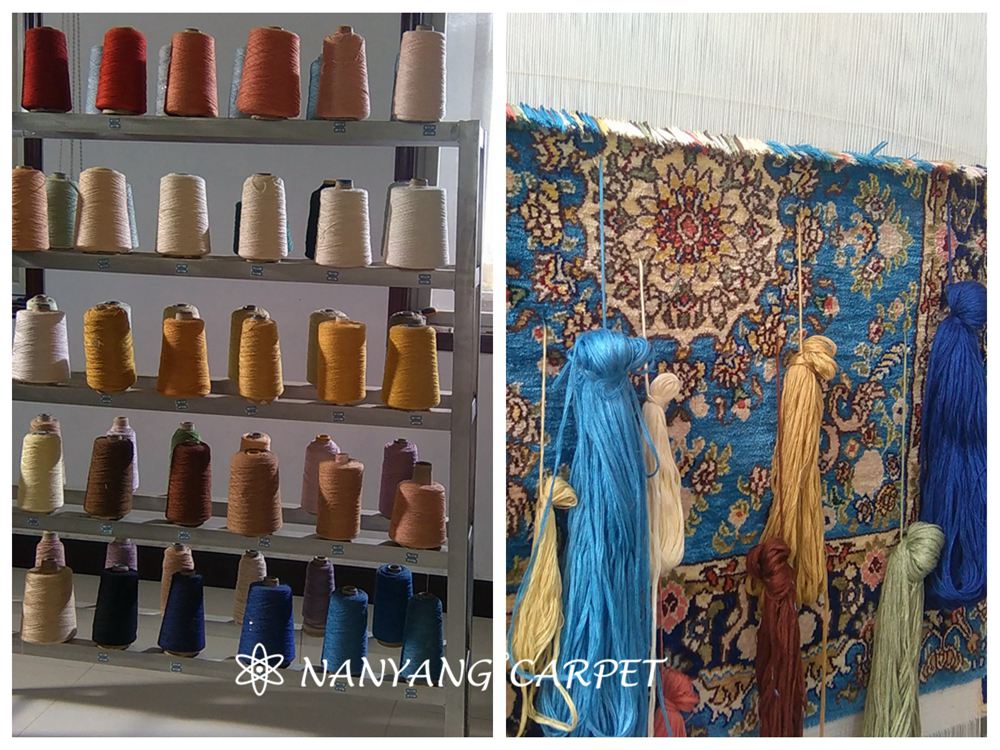 In 1971, Premier Zhou Enlai ordered the production of handmade products for export. At this time, Nanyang responded to the call and began to produce handmade silk carpets using the local long-standing advantages of silk production.From the early 1970s, Nanyang silk carpets began to develop. In addition to the carpet factory producing carpets, local farmers in Nanyang will also use the carpeting time to weave carpets. In 1974, there were about 140 woven carpets and 750 weaving workers among the farmers in Nanyang. By 1988, the local area had grown to 20,000 machine beams, and the weavers weaving carpets had grown to hundreds of thousands. It can be seen that the prosperity of Nanyang silk carpets at that time. 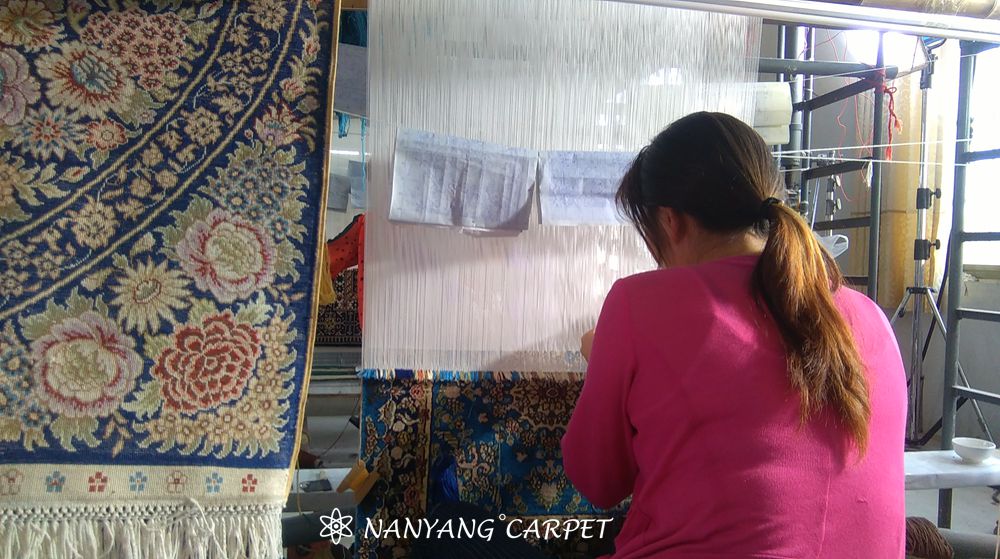 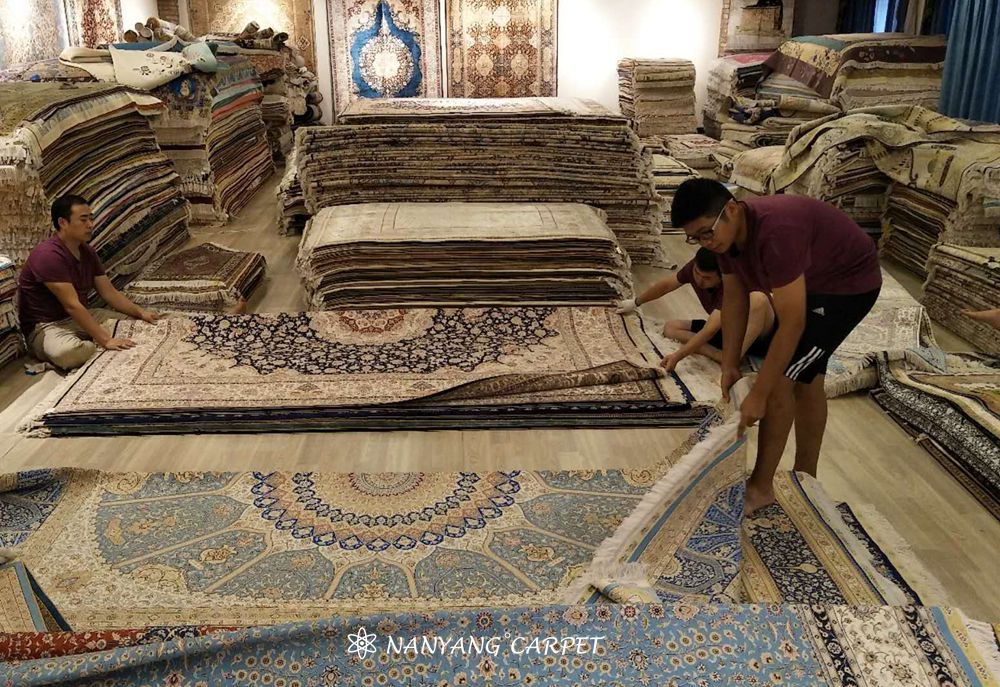 Nanyang Silk Carpet Factory has 60 years history and 9000 weavers,producing 1,000,000 sq.ft hand knotted rugs per year,which is located in Nanyang City,Henan Province,China.Nanyang Silk Carpet Factory are the professional handwoven carpet producer and exporter, mainly supplying handwoven silk carpets and wool silk mixed carpets.Both wholesale business and retail business are acceptable. Usually,we deliver carpets to our customers by express. The delivery time is 5-7 days, and it is door to door service, it is very convenient.Welcome to do business with us.